Mid-year business reviews bring highs and lows to most organizations. It's that critical point when numbers are in, initiatives are in full swing, and all that strategic planning at the start of the year shows through on the income statement.

Sometimes, senior executives even disagree with the CEO as to why or why not certain results are too high or too low. Rather than risk debating possible causes with your CEO and leadership team in full view, why not try a more inviting approach? Test all "possible causes" against one set of data.

This is really root cause for executives.

Here's a scenario and the dimensions of the problem that should be asked to gather data to test all possible causes against. You must gather data for the "thing" with the problem and the closest logical comparison that "COULD have the same PROBLEM - BUT DOES NOT!

So here's the quick scenario - EBITDA is up 20% in Eastern Canada for SMITH PHARMA - and:

So as part of their leadership quarterly checkpoint process, they started to ask the questions to gather the right data

A1: Eastern Canada is up by 20% on EBITDA (Let's just let this be, someone in the room was thinking - it's up for Pete's sake!)

Q2: Can we be more specific?

A2: Yes, says the CFO looking at their Product Market Engine - only Product BloodThinner is up 20% on EBITDA - our other four products have all just met budget.

Q3: Where are the EBITDA results located or coming from?

A3: Eastern Canada but NOT Western Canada (If you want a comparison group, chimed in one executive).

Q4: When exactly did this start in terms of a data?

A4: It started in Q2 just when I hired the hotshot sales person from our competition (and that must be why we're up, she was thinking).

But then the CEO said, "I know the cause - that's when our recent acquisition savings kicked in and started driving the results! We don't need root cause now...I have it" said the CEO.  Well meeting adjourned!

The new HR VP said,"Since were're here, let's get all the causes on the table and we can collectively agree and move forward."

So any other causes:

Let's test against the data

If the NEW REP is the true cause, how does it substantiate that we have a higher EBITDA to budget with Eastern Canada but not Western Canada?

Easy, they said - his territory is Eastern Canada. How does it explain its only on ONE PRODUCT Line and not on the others?  Hmm ...the Sales VP thought ....doesn't seem to make sense. Let's check the others.

Mr. CEO let's test yours against the data....

If the ACQUISITION KICKING IN is the true cause, how does it substantiate that we have higher EBIDTA on one Product line, only in Eastern Canada and all the other product lines are at budget? Well.....now looking at it this way - it really does not support my thinking. With rolled up numbers I just had a few assumptions not validated I guess. Let's move on to the last one.

If the TARGET MIX and Market training is the true cause - how does it substantiate that we have higher EBITDA on one product line, only in Eastern Canada and only started showing up in Q2 - but not WESTERN Canada or any other product lines?

Well, said the Marketing VP - let me field this.

We started the Training in Eastern Canada, in Q2 and only with our Sales Reps focused dedicated on PRODUCT BLOODTHINNER accounts.  They reviewed the legacy accounts, applied criteria based on profitability and started calling more on the A accounts vs. the B and C accounts. We were all over the map before - but essentially we just re-focused. We were waiting for positive results before rolling it out to the other sales teams and regions.

The whole team - except the marketing VP - looked up and said "Seems to make sense but why did we not know about this?"

Marketing VP came back with "I sent you the email at the start of the Q2!"

As the team moved forward they realized they quickly eliminated some red herrings, agreed to roll out the training and the CEO agreed that maybe he was rushing when the acquisition results would show themselves.

Sound too good to be true? Or too simple to be missed?  Maybe....but consider your team's last discussions on finding the WHY behind performance HIGHS and LOWS in your company. You might be surprised.

This visible testing - is a more productive way for 3 reasons (and lacking in many companies):

For more information on how Thinking Dimensions works with Senior Executives to Make Big Decisions and Find Root Cause to Performance problems contact me at tlewko@thinkingdimensions.ca 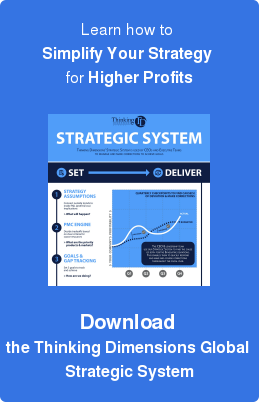