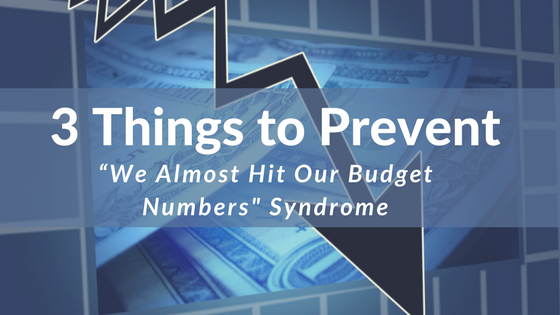 It’s still early in the first quarter and the CEO’s I’ve been talking to are all pretty optimistic about the results they will deliver this year. This early time is the honeymoon phase where everyone awaits to see if the strategic assumptions, changes, and initiatives that have been made leading up to Q1 will, in fact, pan out as the executive teams and key P&L owners proclaim.

Behind closed doors many CEO’s wrestle with the confidence level of hitting their numbers, particularly if their company has experienced the “We Almost Hit our Budget Numbers” Syndrome.

This syndrome is the aggravating pattern of missing set budget targets - monthly, quarterly or annually – despite best intentions and cloudy explanations, companies seem to be okay with it. From this, a high performance “BUT” culture emerges.

Compounding this situation is in many cases no root cause for the misses ( or wins) that have been confirmed.  Conjecture vs. clarity is no way to move on to the next month.  Seasonality, weather, and elections usually are not sound reasons for missing numbers as these factors normally affect all your competitors...not just target your firm.

So What to Do?

If you, as a CEO or senior P&L owner, sense this may be unfolding in your area of leadership, you should review these 3 checkpoints to boost your confidence that the numbers will be delivered and begin the prevention or mitigation of these patterns of results and behaviors from becoming the norm in your company.

Most leaders already know who those people are in their organization but are holding off for them to change. The best CEO’s I work with don’t let this happen and don’t waste time in rehabilitating performers who do not consistently hit their numbers. They remove them. And to their surprise, the company flourishes, regions perform and numbers start being achieved on a permanent basis..

Performance to numbers is a requirement (i.e. a cultural norm) for high growth companies, not an aspiration. The collective tools, attitudes, behaviors and actions of your people determine if they will hit their targets or hope for the numbers to be hit  in the coming months.

What are the inflection points in your Strategy for 2023 and beyond?

The Future is Not X+1

What do you think about ESG?And how is the regulatory environment reshaping ESG investing in EMEA?This is THE Hot topic...